All products we manufacture boot up after power on in what we call ‘ISP’ mode, shorthand for "In System Programming’. During this time the ‘Beat’ LED will be flashing with two short blips repeating every second or so. Some devices like the thermostats don’t have a Beat LED so the LCD display backlight will be flashing with the two short blips. This ISPmode lasts for approximately ten seconds after which the Beat LED will switch to normal mode and will be flashing with a single blip every second or so. If the device doesn’t make it out of ISPMode to normal mode this is usually the result of a bad or interrupted firmware update.
The devices can be easily recovered by cycling power and re-flashing the firmware using the following steps.

First you’ll need to download the firmware from the ftp site, if you are lucky enough to have another of the same device you can use the T3000 update tool to do that automatically for you. Connect to the working device and go to T3000-> help → check for updates → download firmware and update at Tab3.
You will see the firmware update notes which show the changes for the last few versions at Tab4 and the download progress shows at Tab5. 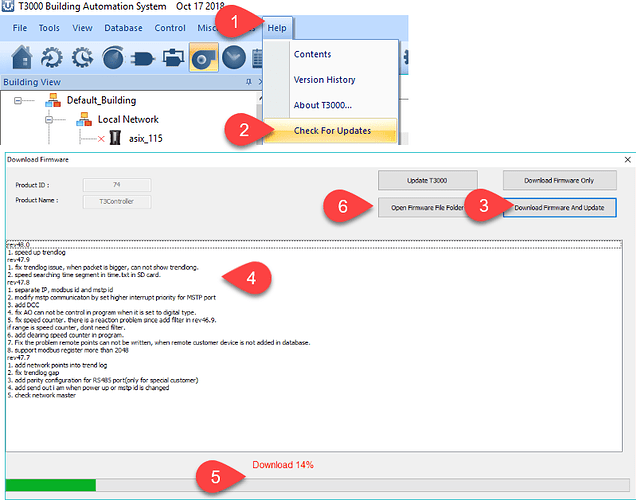 T3000 will automatically check the device model and begin downloading the correct firmware for your device which will be saved to the T3000 install folder, the default location is C:\Program Files (x86)\T3000\Database\Firmware. You can jump to the download folder by clicking at Tab6 above.

Below is a view of a typical firmware folder after a few update sessions with various devices, the firmware files are named according to the device and version as shown.

If you don’t happen to have another unit of the same device you can manually rummage on the ftp site at the link below, we can assist if you have trouble deciding on which file to use. There is no danger of damaging the device by sending an incorrect file, the firmware update tool will generally let you know and allow you to pick another file. There can be subtle differences which the tool doesn’t pick up on which is OK, even if something really goes wrong you can download another file and start again by cycling power. 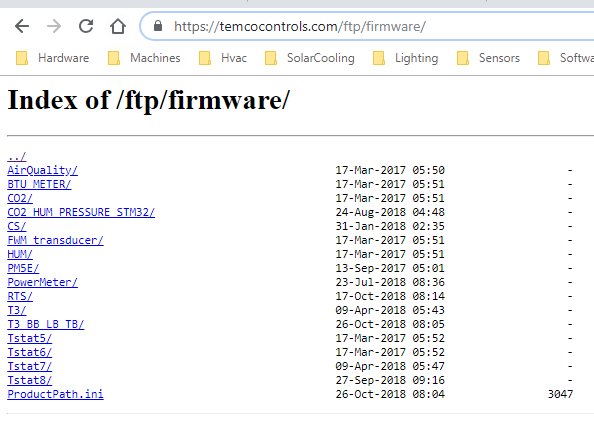 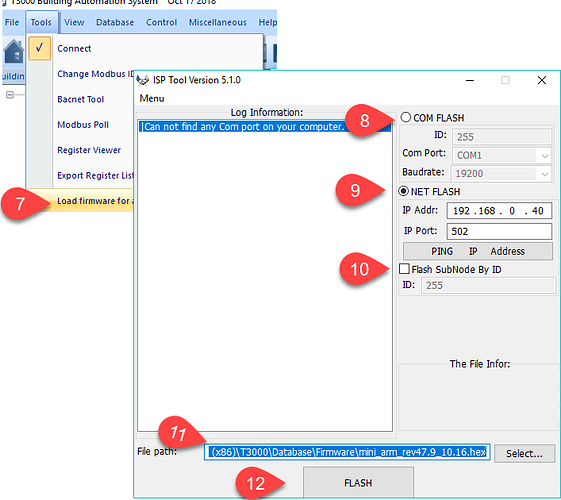 If you dont know the IP address, the ISPTool will send out a broadcast command and find the device in ISPMode. If you are having troubles making a connection to do the firmware update it will be best to do your updating when isolated from the rest of the lan. You can do that either with a direct cable connection from the device to your PC, or if you’re still having troubles set up a small unmanaged (‘dumb’) hub with just your PC and the device connected to the hub. If you’re STILL having troubles, re-verify everything twice: your PC can talk to other normal working devices using known good cables and PC hardware, turn off all software, VPNs and firewalls which may occupy competing resources on the PC.

Is there a way to recover ASIX T3-BB device flashed with ARM version firmware?

You should be able to fix a bricked device, any type of device and any firmware image, by following the steps above. If you have an Asix based device then be sure to flash with Asix firmware of course. You can get the latest firmware from the ftp link:

There is a trouble with ISPTool. It always report an error for all ASIX firmwares. Something about hardware and firmware mismatch. I will check again.

It is best to update firmware by going to: T3000 ->Help->Check For Update->Download firmware and Update, this will automatically select firmware image from the ftp site.

If you are working with a bricked device then T3000 will not know which version of hardware you need for the update so you can download it from here:
https://temcocontrols.com/ftp/firmware/

You need to update the firmware in the first few seconds after power up when the device is still in ISPMode, the beat LED will be blinking with two short blips in a repeating fashion. If you pick the wrong firmware you can try again with another firmware image. It is always possible to recover bricked devices so don’t worry too much if you tried with the wrong file.

How to update bricked ASIX device when it support flashing by Ethernet only without IP? Since it bricked it cannot have an IP address.

Even if you dont know the IP address and port, this doesn’t matter. ISP tool can discover it and use correct IP and port to flash it. The main thing to note is you need to update the firmware in the first few seconds after power up when the device is still in ISPMode with the beat light flashing with two blips, repeating.

A post was split to a new topic: General Ethernet Questions

I’m sorry if this is the wrong subject but I used the ISP tool to flash my t3-bb and now it continually reboots.
Any help would be greatly appreciated.

Sounds like the firmware has been partially flashed. Please search this forum for keyword ‘brick’.

Update: I actually moved your post to the correct topic. Hopefully you will be automatically routed here when you visit your post again.