Thanks, the FCC and BTL would be helpful, looking forward to any additional info… 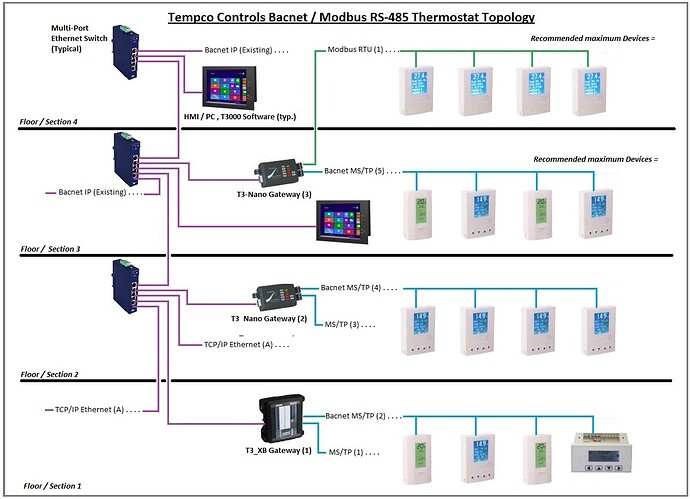 Technically speaking, the controlllers are classified as “low voltage” devices. Anything under 40v, as long as it’s powered by a UL listed class 2 (which means it’s energy limiting or fused) transformer then the electrical inspector will not give you a hard time.

I realize owners and the specifying engineers ask for UL though so we are in the middle of getting UL on a number of items.

I’m currently experiencing ONLY Modbus Communications, NO BACnet communications over the SUB RS485 Bus of the T3-Nano. The MAIN RS485 Bus has both BACnet and Modbus (Master and Slave) communication with two Tstat8’s and sometimes a T3-8o. Firmware as shipped was 49.6, updated to 50.0 and Bacnet MSTP Mode of SUB RS485 bus did not operate for either version. T3000 is the current Nov. 15, 2019 revision.

Is this the normal operation of the T3-Nano?…

There are no “found” scanned (BACnet) devices nor Comm LED’s on the T3-Nano’s SUB Bus in “BACnet Mode”, but Modbus configured devices and the Comm LED’s are active in “Modbus Master” Mode. It operates as if it was set to “UNUSED” when configured for BACnet MSTP.

The Main RS485 Bus of the T3-Nano works with both BACnet and Modbus Devices. The devices are discovered when scanned by the T3000 software and YABE…

The SUB RS485 Bus of the T3-Nano works for and is only active for Modbus (Master).

You are probably right, for some reason I remember that Chelsea has disabled Bacnet MSTP on the ‘Sub’ subnet. I will ask her to enable Bacnet MSTP on both main and subnet.

[Update] Chelsea just confirms that Bacnet works on BOTH RS485 ports, the ‘main’ and the ‘sub’ networks both support bacnet and Modbus. Make sure you have updated to the latest firmware to take advantage of this.

Thanks for the reply.

While attempting to activate both Modbus (Sub @ 19.2K with HUM-N-LCD) and BACnet (Main @76.8K with Tstat8’s) on the T3-Nano both became unstable. The T3-Nano operation was stable with only the Main bus configured as either Modbus or Bacnet, which is fine for my current application using one (1) BACnet MS/TP bus for multiple BACnet Devices.

My intent was to use the T3-Nano as a BACnet IP to BACnet MS/TP Router, which is currently working in early trials but the T3-Nano does not have BACnet Explorer (YABE) discovery of several typical “BACnet Router” Variables (BASrouter); 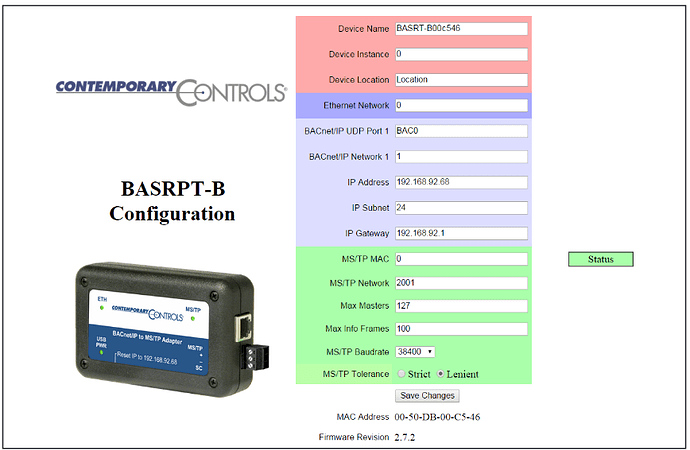 BTW, the T3-8o works “seamlessly” using the Mango Automation Software (HTML BMS Front-end), All the TStat8 points are discovered / visible / can be mapped , but the operation of the T3-Nano has been intermittent (only connected approx. 85% of the time).

We can add more bacnet objects, no trouble to do that. We’re working on (re) activating bacnet for the subnet which you already pointed out.

Thanks for your work with the testing, we want to make this unit useful in more general applications such as this router task.

From my current testing the preliminary Topology Diagram is; 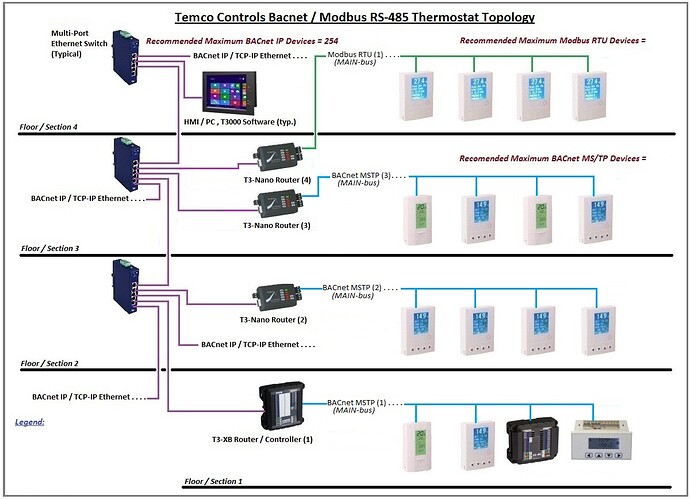 Topology: Any particular reason you have that 4th floor thermostat bus on Modbus while the rest of the system is on Bacnet?
Bacnet Objects: We’ll add some AVs for the T3 series controllers like we have done for the other products: Communications settings, IP address and so on.

No reason at all for the Modbus (for my current application), it is just to show that a “Modbus RTU” could be implemented on the MAIN RS485 Bus.

Is there any detailed info for EOL Terminations or Biasing of the Temco RS485 MS/TP Bus for Tstat8’s and other Temco BACnet devices? Thanks.

T3000 Software and YABE are able to see (discover) multiple BACnet devices on the T3-Nano MAIN bus, but other BACnet Explorers (Mango and Wacnet) can only see the 1st Device (a Tstat8). I’ve had similar situations when a Lon Bus did not have an installed termination resistor, one such Lon Bus has been extended to over 2 Km using an existing Telecom Line (Cable) with a single properly located EOL Resistor and no repeaters and has been operational with 100% communications for over a decade.

Hard to say what might be going but here’s a couple of suggestions on how to debug deeper. 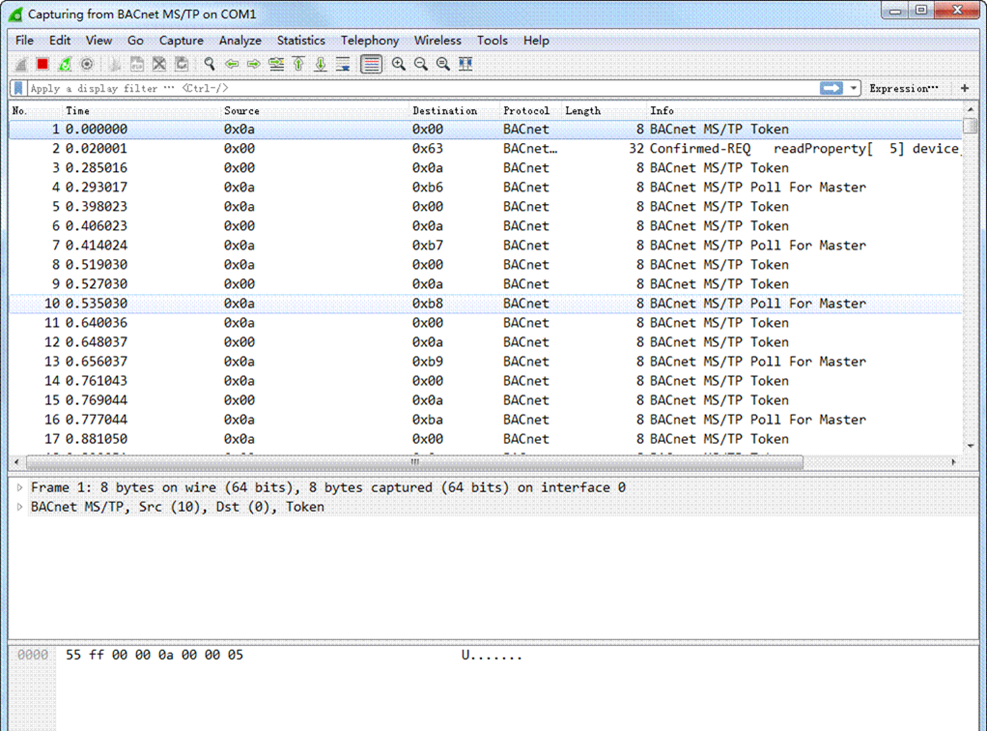 When it comes to debugging Ethernet traffic there are plenty of hardware and software tools to choose from, Wireshark is a powerful example and it its

For termination issues you can have a look at the RS485 signal traces and get some clues. Here’s a little pocket scope which can show the A - B trace which is what you want for RS485 signals. 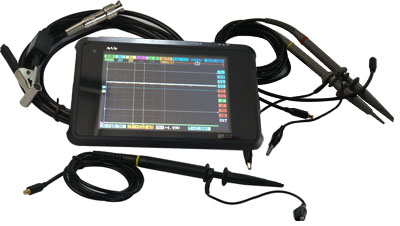 Standing by to help more.

Thank for that info.

Looking to get some info on the designed bias and termination resistors, because I only have an RS485 BACnet MS/TP Buss with less than a total 10 feet / 3 meters of 18 Guage twisted shielded wire and a maximum of four (4) BACnet devices, including a T3-Nano or T3-LB with intermittent MS/TP communications.

Four devices on a short network like that, you shouldn’t have to worry about termination at all. If there are communications issues it could well be at the data layer level rather than the RS485 signal level. That means the wireshark capture would be useful as a first step.

@PeteR what did you end up doing with your testing? I’m curious

There’s a lot of testing going on here all the time: communications, sensor accuracy, power consumption, high voltage tests. Which test are you referring to?

I’m still testing the Temco devices. The Tstat8’s RS485 Bacnet MS/TP bus is connected to a T3-TB which has been much more reliable than the T3-Nano. They are bench mounted on Din Rail with several Temperature, Humidity, Light Sensors and ice cube type IDEC Relays (for DO and DI testing simulating Motor Starters and or VFD’s, with status feedbacks). The Tstat8’s will be installed on a couple OpenAG MVPs as the “Brain” with the Raspberry Pi 3+ as a monitoring computer.

The BACnet IP bus devices, T3-TB and T3-8o have reliable communications with T3000 software, YABA and the other BACnet “Explorer” software programs.

Also the Tstat8’s RS485 Bus always has to be installed as 3 wire (terminated ground) as shown in the Temco documentation for the most reliable communications; https://temcocontrols.com/shop/tstat8-bacnet-thermostat/

@PeteR I have a small project I want to put a couple thermostats in a building and control the RTU. Monitor a couple points for temp within the rtu ducts as well. Then second step would be to monitor the boiler system and circ pumps as they have the 3 boilers running all the time and don’t stage them. I feel that I need to wait for more reliability on the product before deploying. What are your thoughts on deployment for reliability? What are you using for a front end / Graphics?

I do not know the long term reliability of these controls devices, I’m familiar with and use Honeywell and Johnson proprietary RS485, Lon and IP with Symmetre and Niagara Front-ends. I’m attempting to assess the Temco Devices by deploying, monitoring / trending their operation and connected sensors.

The current tests are to determine reliability and compatibility with other simpler HTML5 monitoring software like Mango Automation and Mango ES; Mango Overview — Mango OS

Its hard to say what might be causing communications issues in your test setup but rest assured we are always keen to get to the bottom of any issues that crop up.

One thing you mention here is that the grounding has an effect on communications. That means there could be grounds crossed up in the AC supply somewhere if you’re powering more than one device with the same transformer. Of if you have several supplies in the system then do make sure to get the grounds of all supplies commoned up well and tie them to earth for good measure.

Another thing to confirm is that you have the most recent firmware in all the devices and your front end. You can update firmware and the front end software from T3000 → help → check for updates.

I imagine you have seen the communications health status shows at the bottom of the T3000 interface, I am interested to see what this shows on your setup. 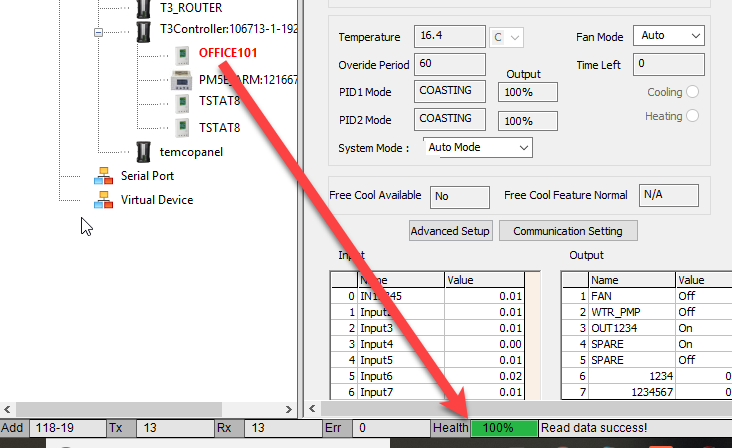