I wanted to know if I can lock the central button so that the user cannot use it, but can use the rest of the buttons.

I also want to use it only for underfloor heating and I don’t want the fan icon to appear on the screen but the flame icon.
It’s possible.

I will see what we can do for you on the keypad, please stand by.

For the icons, have you had a look at the icon customizing table? Here you can set what icon comes on with which relay. 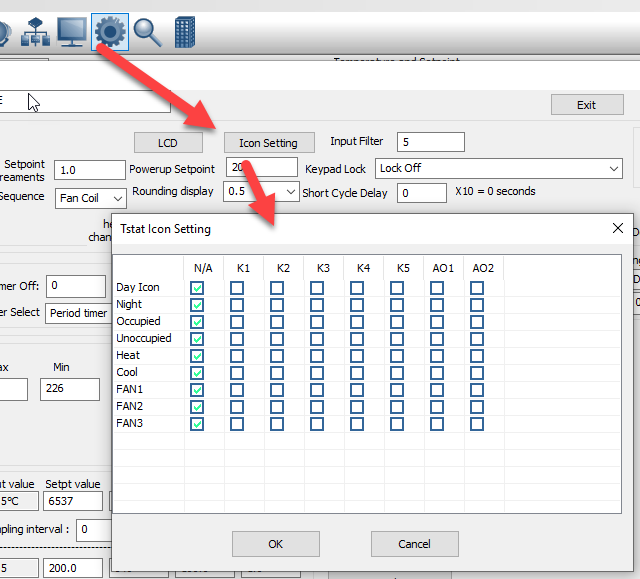 The screen that shows me is not the same as it appears on my T3000, I attached screen.
I tried to activate the box OUTPUT CONTROL AND K1 HEAT.
But it is not recorded. 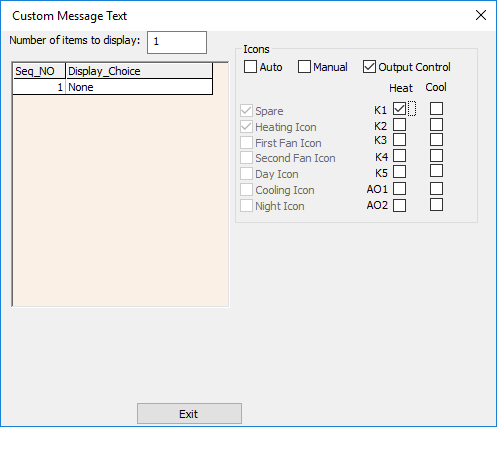 Tstat7 and Tstat8’s screens are different in current T3000 version, they will be combined into one display soon.

I will try to repeat the issue you saw with not being able to configure the icons.

For sure you can configure this application.

First step is to give the outputs some names. I assume this is a ‘Two Pipe’ fancoil where the valve will be used for heating during the winter and cooling in the summer.

Then head to the ‘PID’ table where you set the numnber of stages for heat & cool as well as the staging of the outputs for each of the various modes of operation.
At Tab1 I have set the numbe of modes to two, Off and Auto, you can add a manual stage if you like, each mode adds a new staging table where you specify which output is on for any given heating or cooling stage.

At Tab2 I have set the number of heat to 3 and number of cool to 3, the maximum combined number of stages is 6 so we had to sacrifice the low fan speed for heating.
At Tab3 we have selected the Auto table for configuring first. At Tab4 are the outputs along the left, each row represents one ofthe thermostat outputs. Each column represents the various heating and cooling stages. In the coasting column for example, all outputs are off. As another example, the heat3 column shows the floor heating output is on, the valve is open and the high speed fan output is on.

Now set which input will be the feedback sensor for the system in teh PID loop, do that at Tab5 in the ‘Advanced’ settings table, PID section. Here I have selected the internal temperature sensor as the feedback for the PID loop, you could consider adding a floor heating sensor to one of the spare inputs and set that up in a second PID if you like, there are up to three separate PID loops in the Tstat7. The P term is set to 6 which means the room has to be 3 degrees below setpoint to get into stage 3 heat or 3 Degrees C over setpoint to get into stage 3 cool. The numbers are not critical, if you were in DegF you could go with 10 or so. I suggest you leave the Iterm at zero till commissioning is done becuase you can get unexpected results with ‘reset windup’. Later add in the I term, 6 would also be a reasonable setting for I and leave the D term at zero generally.

3 posts were split to a new topic: Tstat7: Adjusting time & date from keypad