I can see the Frequency variable from the VFD using the Bacnet Tool. And I am testing and experimenting with that tool to be able to change it. (using a little YABE documentation from SourceForge. I want to use that Bacnet object in a program as an output. (to change it based on some input conditions. Can you give me a syntax example? I am assuming you get the IP address, the UDP port and object name from the Bacnet tool? If that’s the case I had better change my VFD to a fixed IP address! And since the object doesn’t persist from one Bacnet tool session to another does that mean I can’t use it in a T3000 program?

You can use the Bacnet commands such as BO, BI, AV, AO. There are two ways to program external bacnet devices depending on whether you are connected over the Ethernet port or the RS485 port. 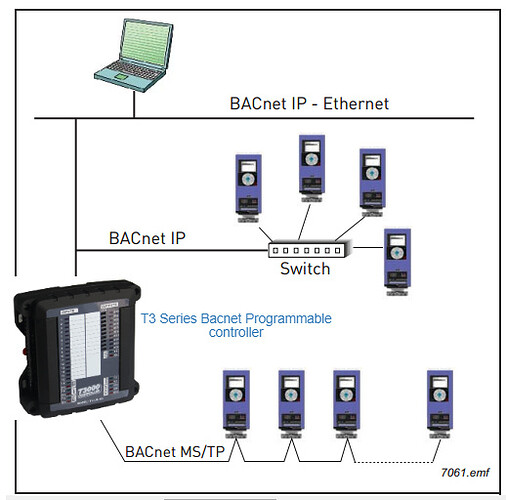 Programming for the Ethernet Port

If the VFD is connected on the Ethernet port the commands will be like this:

This is a read command

Variable 1 on the T3 will be equal to the AV1 of the external Bacnet device (VFD).

And this is a write command,

The analog output of the VFD will be set to the local variable 2.

Programming for the RS485 Port MSTP

If the VFD is connected on the RS485 port of the T3 controller, configure one of the RS485 interfaces to Bacnet master mode as shown below, then the programming will look like this:

Where 166 is the last octet of the T3 controller IP address and 2 is the Bacnet MSTP device ID for the VFD on the RS485 subnet. 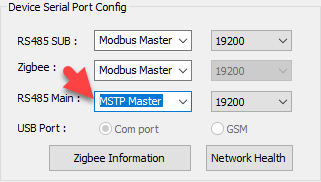 Final note: There’s been some subtle changes with how IP address and panel ID are handled in the programming lately to make things more transparent for you in the programming. Please update the firmware and T3000 front end when working with external bacnet devices.