I’m working with a HUM-N-LCD sensor. The sensor is connected to the T3-LB by RS-485. Problems:

Thanks for the detailed efforts there. There has been a lot of work lately making bacnet smoother to work with on the subnetworks, I am guessing an update of the T3000 front end and also of the devices is in order. You can update using T3000 → Help → check for updates → update T3000. Once you have done that you can also update the devices in the same T3000 dialog → Download and update firmware.

Havent had reports of self heating on the temperature sensors, the HUM-N model hardware has been updated with a new display so Charly will check this for you.

Fandu will try to duplicate the password issues mentioned as well.

I made an update. the sensor “broke”. only blinks. Errors during the recording was not.
it seems to me that the T3000 has written somebody else’s firmware. The sensor had before modification Firmware version 1.5, Hardware version 18, product name CO2NODE (old firmware). T3000 chose - CO2Node_Rev4.0.hex (https://temcocontrols.com/ftp/firmware/CO2/CO2-NODE/). Send the .hex file to the mail, which is installed now. I will restore sensor function.

There is a post here in the forums for unbricking a device,

I had an interruption with internet connection during an update and now the controller just keeps cycling through the leds on the controller. T3000 LB. Is there a way to unbrick the controller? Thanks in advance…

Summarizing here:
Cycle power, in the first few seconds after power up the device will be repeatedly blinking the heartbeat or backlight two times quickly, this is the bootloader period where you can load firmware. Use T3000 -> Tools -> ISPTool to load firmware, you can download firmware manually from here if you don’t already have it on your PC from the earlier efforts.
https://temcocontrols.com/ftp/firmware/

the update is downloaded. but the sensor does not work, but only blinks. 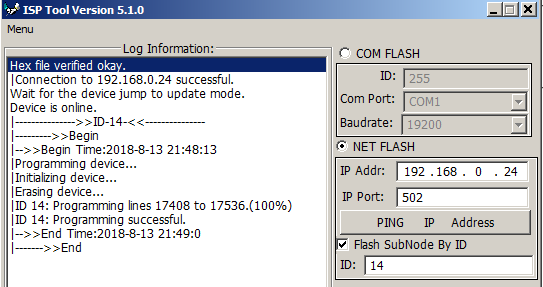 Is it blinking two times quickly (update mode) or one blink on the heartbeat LED if it has one (normal operation mode)?

I’ll get the team to send you firmware for the Co2-node directly, it went through a hardware update for new LCD and new C02 module recently so the ftp firmware site might be out of date. Send me a note via email and we’ll do that this evening when they get to work. maurice (at) temcocontrols (dot) com.

one blink on the heartbeat LED. I will send a letter.

If a device is stuck with bad firmware or a partial firmware load it will continue resetting and starting up in bootload mode, you can recover it by following the steps shown in this forum, search for ‘recovering a bricked device’.

Standing by to help more once I understand your situation better.

I downloaded the latest version. the sensor is working. Thank you