A sample application for a sump pump controller with battery backup

I wasn’t happy with pumps with built-in 120VAC float switches operating line voltage pumps, if there’s a power outage the system is down which can lead to flooding very quickly. I wanted a system which could operate from batteries in case of a power outage so I changed everything over to a 12VDC system using two boat bilge pumps, a T3-TB controller and some stainless steel float switches.

One of the pumps is a regular DC bilge pump and there is a second pump, a large Seaflo 12V DC 4700GPM as a backup and in case of floods. The system operates off a 12V car battery which is charged by a trickle current battery charger.
The T3-TB manages the system, there are three float switches wired directly into the inputs of the T3-TB. When the water level reaches the lowest float everything is off. The middle float switch brings on the smaller pump and the highest float brings on the larger pump.

A manual override switch runs both pumps in case of an emergency, regardless of the state of the float switches.

I used variables to manage the floaters and counts how many time the pumps ran. At the end of the day, the counters are reset to zero.

I harvest variable values through modbus with my plc to obtain statistics and to send emails in case of troubles (no drainage in a day, emergency pump ON, etc).
And voilà ! 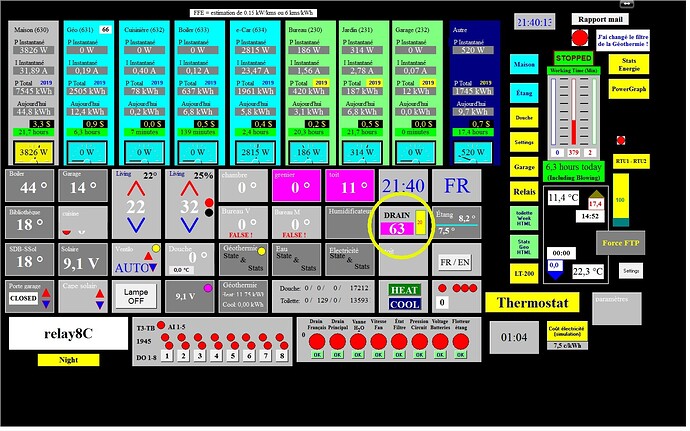 Hell Mike, thanks for sharing. I did a little editing up there to make things clearer. I can see from what you went through that we have a few things to do on our side to help you get rid of that PLC ; )
-Emailed alarms.
-More powerful graphics tools for working up the MMI
-Some better charting tools like you did there.

We will get there… eventually. I could keep a hundred developers busy with my wishlist.

One thing you could consider for battery backup projects is a small UPS like the type normally used for PC backup power, that would save you from switching the pumps over to DC.

Well done on your project and thanks again for your efforts with the equipment.

Hi Maurice,
in fact I just replaced my battery wiring to an existing Trojan deep charge bank, hooked to solar panels. It’s like a big UPS

I’ll maybe change them for LifeYPO4 batteries. Y for Yttrium, should be better than standard ones. Do you know them ?

For the charts, just give a look there: amazing and simple way to generate them and the owner is a nice guy: https://www.rgraph.net/

For T3000, smtp and why not pop to interact with the units !

POP: Emailed alarms are high on the todo list indeed.
Charts: We’ll get there, a few things to clean of the todo list first but agreed, we need better charting and reporting as well.