I updated the t3000 and T3-BB last week and now its acting crazy. Unfortunately Im not sure what version I was on before. I now have the latest.

The problem im having is with a program I use to poll some Tstats and average them. The entire program is below. Several variables are not used as they are not yet implemented. Im only concerned about the ones in the last line. For some reason now, 3FTMP is shaded grey unlike all the other variables. ESTTMP is also grey though… again not yet used. In line 140 and line 260 3FTMP is grey. 3FTMP is not updating. If I compile and send the program it will update for a short time. Eventually it stops updating. When I came in this morning it was 85F in the building. The code below is from one program that I use to poll the stats. The second code is the operating code for the boiler and outside air damper. Ive been running this code for about 5 months with absolute perfection. I really need to know what has changed.

Send your *.prog file ifyou could please. we will check it over first thing in the morning.

It seems to be working at the moment but thats how it goes. Once the 3FAVG lowers enough to start the boiler it seems that is what causes 3FAVG to get stuck.

This is a normal operating day for this system. Its far from perfect but it has been working until I can make it better. 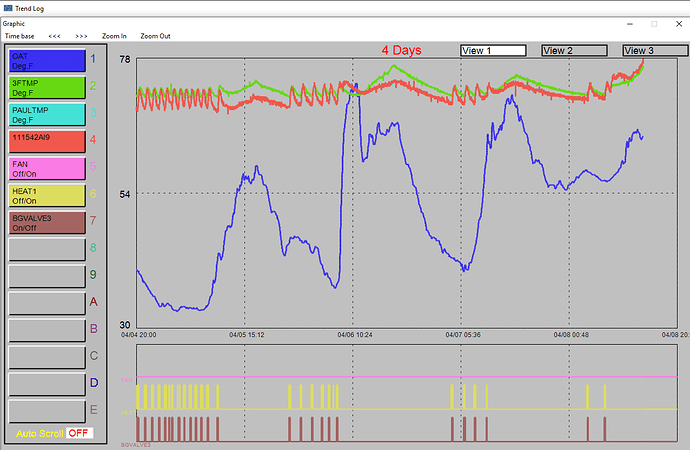 This is the last four days. 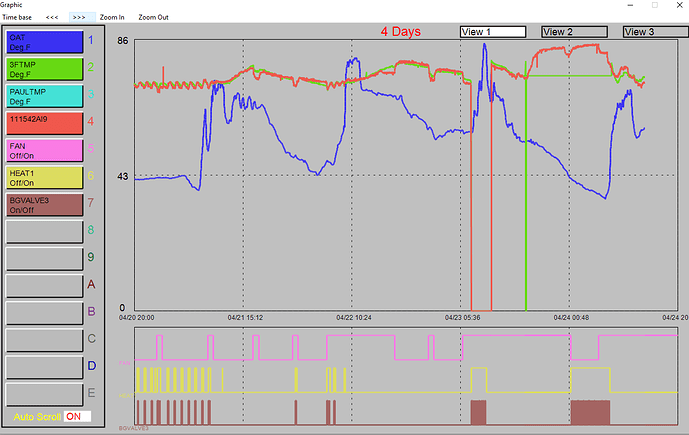 I notice that item4 in red is a bacnet object, is that data coming in from a 3rd party bacnet device? If its a T3 controller or expansion module you can assign user names and display that here by referring to the inherent name, like 4IN1.

If its a Tstat8 on the subnet, or some other 3rd party device then it would show like you have it which is rather cryptic I have to confess. We’ll get something going asap where you can show some text as well.

Update: And reading your program above, those lines 20 thru 140 for initializing the variables are not really helpful. I would just delete those lines because the vars will maintain their last commanded value in between program scans. As the network points update the vars will be updated by lines 150 thru 230.

Most of the program is referencing Bacnet instance numbers and objects. My suggestion would be to also use Bacnet for lines 240 and 250, any reason why you’re not using Bacnet there too?

Item 4 is a Tstat8 on connected to a T3BB by RS485 main. I had a terrible time sorting out how to read the temperature from these when I first configured these. We spoke a bit about it at the time but I could never get it to work any other way. I am open to a better way if one exists but that does pull the temperature from a Tstat8.

Maurice: Set the protocol of the Tsat8 and the T3 controller to bacnet, then you can refer to the bacnet objects on the Tstat8 by instance number and bacnet object ID. Just like you have going on in lines 150 thru 230.

When I first tested the system I found that if for some reason a bacnet object cannot be read it will simply leave the variable at its previous value instead of dropping it to zero. I would much rather the variable was zero than a stale value or I would have no way to no the value was wrong. I added lines 20-140 to ensure that the variables are zeroed and then populated. If they cannot be read, they stay zero and I see the problem. If this was fixed at one point I didn’t notice but it absolutely was an issue when I wrote the program originally. I understand your concern about this but the program has run this way for months with no issue.

*Maurice: Just spoke with Chelsea, our developer here. She re-affirms what I was saying that when a thermostat goes offline, the network points will float along at whatever was last read. We’ll add some auto generated alarms for you so that when a device goes offline you will know about it. And I added to our big todo list is some commands to deal with offline devices in your programming. *

Lines 240 and 250 are for two HUM-D sensors I have connected via ethernet. Ive never been able to get bacnet over ethernet to work at all. I tried and tried and simply gave up. I was able to read these sensors with modbus so I just left it. These lines too have been working well for months. I might look at this again if you think something has changed to cause this to be a problem.

Maurice: We just set up a test and can confirm that bacnet over IP to the humidity sensor is working fine. You may need to update some firmware for the T3 controller and HUM as some of this Ethernet routing and network programming is new.

I certainly dont want to ignore your recommendations when asking for help. I will try to implement the suggestions you have made and test to see if it helps. Im apprehensive to remove the = 0 lines unless the hanging variable problem has been addressed.

Maurice: Standing by to help, those initializing lines are redundant as far as I can see.

it might be unrelated but I just noticed the sensor in blue on the chart above seems to be reading wrong. Its and outdoor air temperature sensor from you guys. It looks like something happened at the time index just under the i in View 1. All the stats dropped out and at that same moment the OAT spiked way past a reasonable number. It never made it to 70F that day. The sensor is shrouded, on the shady side of the building with no real way to be artificially heated. It spiked up to 86F which is false at the same moment the Tstat8 data went away. This caused the boiler to fire since it thought it was way cold. The next time it happened was at the end of the View 1 box where the average gets “stuck” and flat lines out. That is what is bothering me. In that same time frame the Tstat8s were reading okay(red) but the average got “stuck” low.

Maurice: The network points look to be going offline intermittently. The jumps down to zero should not be happening, I would get those init lines out of your program for good measure. Chelsea is going to do a test to replicate this and we’ll udpdate later.

Im not sure whats going on really. We get some decent temperature swings this time of year but not that abrupt. OAT is going up 30 degrees F in minutes. OAT is read directly from a sensor connected to the T3BB inputs. I think something more is wrong here…

Maurice: No known issues with reading temperature sensors, pretty standard stuff as you can imagine. If there’s something weird going on with the power supply or grounding that could potentially cause some bad readings. You can rule this out by adding a fixed 10k resistor on an input, set the range to temperature and graph that along with the outside temperature. The 10k resistor temperature should stay flat at 25DegC.

I like your idea to fit a 10k resistor and monitor it. Ill try that this weekend. You should add that to the documentation as it would help to verify conditions on a new system. I have suspected for some time I may have a strange grounding or power issue. When I began setting up the system I did have to make some changes to the power and grounding to make things reliable. I may have missed something. The building is 3 floors around 20,000 square feet. The power supply for the BB controller is not the same as the tstats. They are powered from a different panel even. I am using a 24 vac transformer to power the BB controller. Its not a basic HVAC transformer but a somewhat high end machine tool industrial control transformer. I thought it would be approprate to power the controller a few other items. The load is well within the operating range and it has no high load items. In hindsight this is probably not the best solution. I think Ill get a dedicated power supply for the controller at least. Do you recommend 24vac or would DC be a better choice. I can get either.

I appreciate your help Maurice. The major reason I decided to buy from Temco was the support forum here. I could see that you personally help those who have questions. You have always helped me quickly and expertly. Its good to work with someone who knows the systems and is willing to test.

I have not had a chance to make any changes yet but it seems to have returned to “normal”. Even the OAT seems to be reading in a more sane manor. I still think you are on to something with a bad power or ground situation. If you can recommend a power source Ill get that installed and make the other changes we talked about above.

I still have a lot of work to do on this system. I had to put things on hold when the heating season started since reliability must be 100%. We are entering a season here where we can live without heating or cooling so I have some time to experiment with the controls to get them just right. This building was using 1960’s controls with old relay banks and pneumatic thermostats/damper controls. It was too big a project for me to do myself all at once so Im taking it on a bit at a time. The boiler controls alone saved us almost 50% on fuel over the prior year and it was much colder for longer this winter. Im just an amateur with building controls but your systems are really great. I promised the owners I would save them the cost of the system in one season and we saved it in a couple months! After we sort out this hiccup with the boiler im going to add the cooling and damper controls. I look forward to seeing the savings I can get us there too.

This is just and update of the graph above. The system seems to have settled down and is operating like it normally does.

Well done Dave, feel free to post some details in the project showcase section of this forum. There’s already a couple nice ones there, one which won a big award from the Association of Energy Engineers.