The priority array is a mechanism to support multiple masters in a given system. Normally a controller will be in charge of the outputs on board itself. Occasionally you may want to override the outputs from the logic running in an external master controller, perhaps to do morning startup or load shedding. In emergencies there may be a smoke evacuation mode managed by a fire control system.

Priority arrays are read only, if you would like to change the value of an output you write to the present value and specify the priority at which you are commanding that output. The T3 controller will automatically add the entry to the priority array and command the output state using the highest priority entry in the table. Entries higher up in the table override the lower priority entries.
If you write from an external master and do not specify the priority level, the T3 controller will assume level 11 which is lower than the on board programs which operate at level 10. 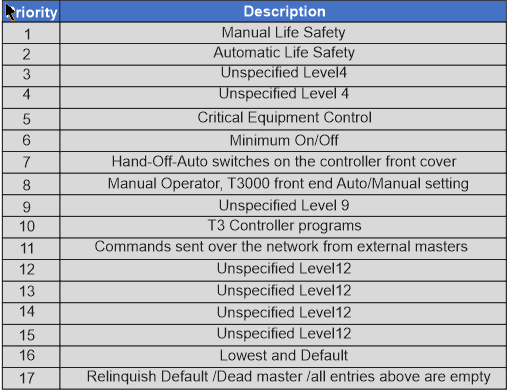 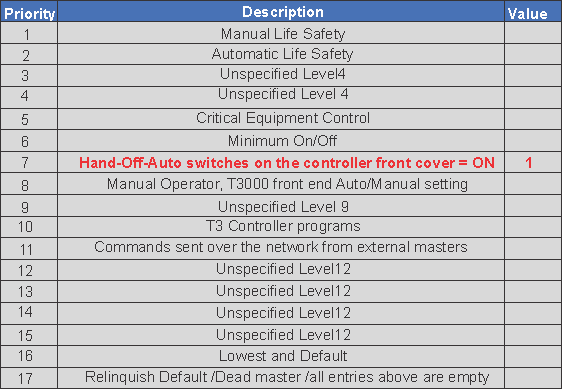 When the operator using T3000 front end tries to set an output to manual OFF at Tab3 this is assigned a priority level of 8. The hardware hand-off-auto switch operates at a higher priority of 7 so the output stays on. 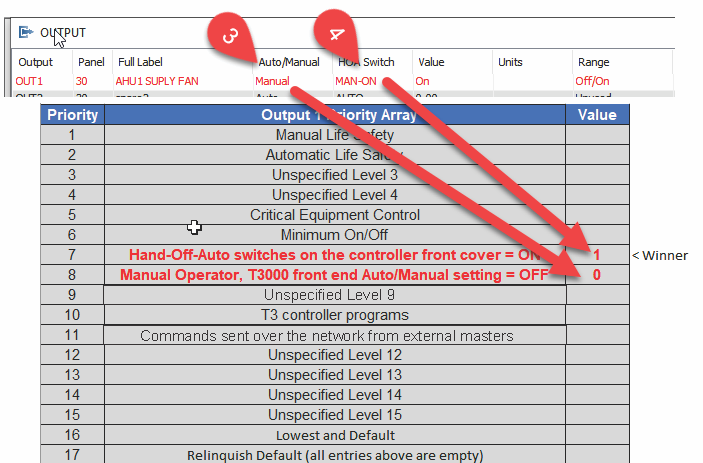 Here is an example showing a program running on the T3 controller turning Output1 on. The hand-off-auto switch on the front cover of the T3 controller is in the auto position and the output on the T3000 software user interface is also in auto mode so slots 7 and 8 in the priority array are empty.

Now an example of writing a command to the priority array using a 3rd party master, in this case a PC running the free and very handy Bacnet Discovery Tool from Contemporary Controls. Here at Tab1 we’re sending a command to turn Output 1 off at Priority Level 9. On the right is the view of that same Output 1 using the T3000 → Tools → (Yabe) Bacnet tool showing the results of the command, Priority Level 9 correctly shows the off state. To clear the priority level 9 command you would write a value of 255 after which the output would revert to the Level 10 state which also happens to be off in this example.

Final Note: Please use the latest firmware to see priority array in action as above. Earlier versions before April 2020 did not support relinquish default and used level 9 for network commands.

Update: You can now see the contents of the priority array by right clicking on the output. You’ll need to update both the device firmware and the T3000 front end itself. 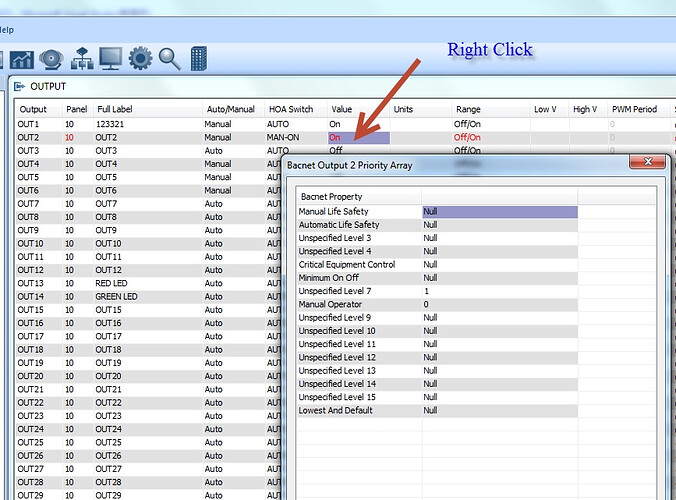