Can a controller (T3-BB-32i) establish a Modbus TCP communication via Ethernet ? With an example Outdoor Weather Station (WS-1-D).

In this screen shot below we have a T3-22i connected on the RS485 subnet and it shows in the inputs screen as external inputs, this is fully transparent and requires no setup. Exansion I/O is not normally be used on the Ethernet port as expansion i/o in our T3 environment at least, since that’s the way our system grew up.

If you had an application that called for adding expansion I/O using the Ethernet connection you can do that too but its not as flexible. You would need to read/write all the registers or bacnet objects manually in a program. For Modbus use the REG keyword command or in Bacnet use the AV,BO,BI,AO commands. Here’s an example of using those commands when integrating a Honeywell SmartVFD using bacnet, it would be the same in Modbus except you’ll use the REG commands to read/write Modbus registers.

The T3000 front end makes it a lot easier to manage the expansion i/o when its connected using RS485 and set to Modbus protocol. Soon bacnet mode will be fully transparent as well. 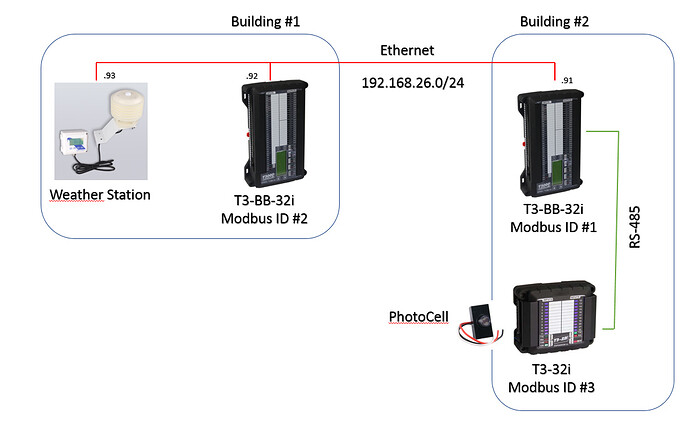 how can the t3-bb-32i Modbus ID # 1 access the data of the weather station ? To obtain the outside temperature as an example.

A picture is really worth one thousand words, thanks Pat. Now all is clear.
(And hope you’re not offended by my deleting a few of our back & forths there to clean up this thread).

Here is a view from T3000 → Tools → Bacnet tool (Yabe) where we can see a T3 controller and the outdoor weather station, both units connected on the Ethernet lan. You can see the bacnet ‘AV’ objects for the weather station ( named incorrectly which we’ll have fixed shortly) using the Yabe tool which makes creating a program to poll them easy. In this case we can see we’ll want to poll AV12 and a few others like the humidity, enthalpy, dew point and light sensor. 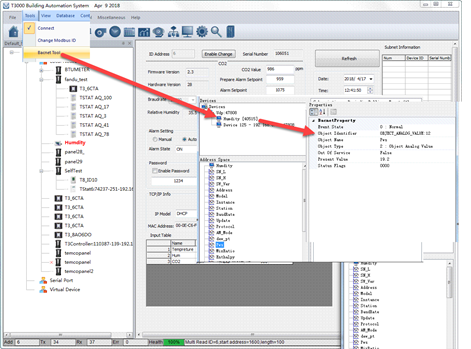 Below is the program which will run in the BB, it uses the bacnet keyword AV to read the outdoor weather station device with IP address ending in ‘.34’, in your case you would replace this with .93 to match the IP address of your weather station. The area above the program is the resulting variables on the local BB controller. 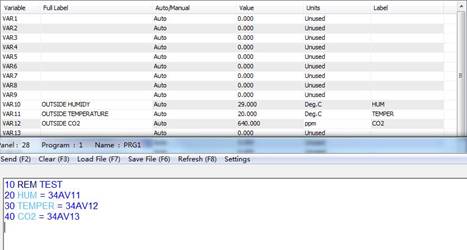 Final Note: We’ve recently added a mechanism to make integrating of 3rd party devices easier using standard bacnet objects which use either the Bacnet instance or an IP address. For now to get this to work you will need to make the IP address and the Modbus / Bacnet ID the same number. Soon we’ll let the system work using the bacnet instance so you don’t have to go through this hurdle.

Ok, I understood your explanations. This answers the first question with the Bacnet protocol. But for the second question? The photocell?

I will need a data sheet for the photocell to make a more informed response here. The T3 series controllers and expansion modules can tie in directly to many sensors directly by setting the range at Tab1 and jumper setting at Tab2 in the inputs grid. The T3-22i expansion i/o module will show up as inputs 33 and onwards automatically once the module is detected by the T3 controller. You can check the status of expansion i/o by checking the input grid and expansion i/o dialogs as shown. 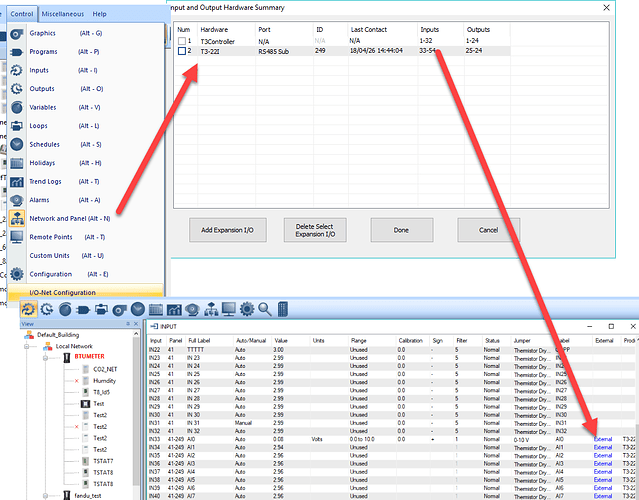 Once that is working, here’s an example of configuring a 0-10V pressure sensor. Select range 50 at Tab3, then fill in the units at Tab4 and values for pressure at 0V and 10V at Tab5. If your photocell is a transducer the steps will be similar. 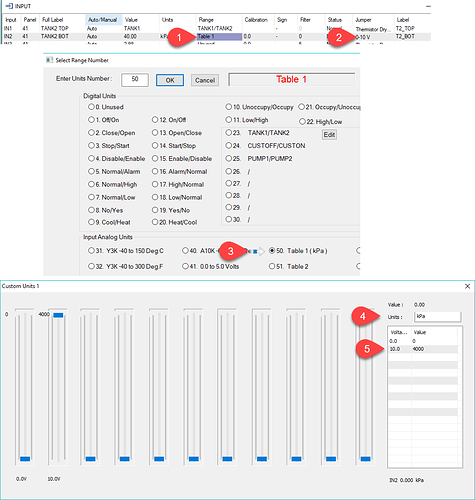 Only related to part of this .
I found that the PT-12 expansion module does not automatically come up as say input 33 as the T3-22i does.
Curious as to why.
There are ways around it but it would be nice if it did.

I thought it was already available as expansion I/O, thanks for the heads up that its not. We’re adding it now, stand by for a new release in a day or two.

Thanks for that it has come up nicely.