Here’s a question which came up by email, thanks RC for considering our gear on your project.
Maurice

I currently have Honeywell Spyder Controllers attached to a few of my air handlers, they communicate BACnet.

Here’s a preview from the data sheet of a Honeywell Spyder controller for reference, they are a programmable Bacnet controller with RS485 (Bacnet MSTP) port and are normally managed by Honeywell’s tools. They come with two different flavors of licensing, one where the license is built into the Webpro tool and the other where you can use a license built into a Niagara workbench or Jace. I am guessing that this licensing only concerns the programming for the controllers and that the bacnet objects within the Spyder will be available over the RS485 port afterwards using general bacnet commands. 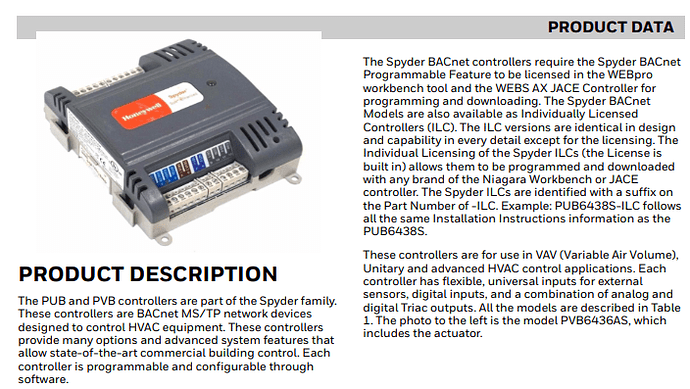 Will the controllers you sell integrate with them or would they be able to communicate directly with software you have?

Edited Jan20, 2019: Bacnet instances are supported on all network layers, both RS485/MSTP and Ethernet. So the programming is like so.

They would have to go to a main controller before going to my computer obviously, is this where the LB and BB controllers come into play?

Correct, you will need one of the T3 controllers to run program described above. And vice vera, I assume you can write programs in the Spyder which can make use of the bacnet objects in the T3 controllers. Not sure how the Honeywell licensing would work in this case, they probably have some limit on the number of network points you can manage from the Spyder.

I currently only have those three Spyder controllers and am working on building up the automation system so if I can stop at them and then get the LB and BB controllers to go from there great, I just need to verify if the software will work with the current controllers I do have and if they have to be plugged into the LB or BB controllers or however that works.

The T3 controllers will be a good candidate for expanding your system. Some of the existing system can be managed from the T3000 environment like adjusting setpoints and viewing the status of the I/O. For more advanced management like making program changes you’ll need to do that with the Honeywell tools mentioned in their datasheet.

And is there a Logic set up similar to something like this in the repository?

Haven’t got any examples like this but will work on that soon.

If you want to see what would be available on the Spyder controllers, use Yabe to explore the network (assuming the controllers are all connected together). You will be able to see what variables are available from each controller that way and therefore available to a T3 controller and T3000 once Temco implements BACnet IP addressing.

Finally got set up with a Honeywell Spyder controller here in the office. I found on HVAC talk that the unit will use auto detect to set the baud rate on power up so tied the unit into an existing MSTP network and we were good to go with our various bacnet tools.
Here is the connection setup here for integrating with typical Bacnet devices: item2 is the T3 controller, Item4 is a VFD connected over Ethernet and Items 5 and 6 are connected over RS485 Bacnet MSTP. The programming for each device is shown at lines 4, 5 & 6. You can see the format is the same regardless of how the device is connected. You can refer to any device in the building using the Bacnet instance and the usual Bacnet objects such as BI, BO, AO, AI, and AV. 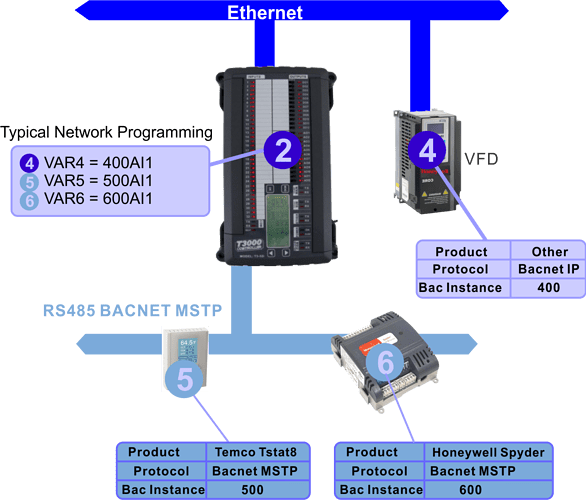